Not just another internet marketing site

While researching possible titles for this site I google ‘skeptical affiliate’ and find a link through to a question asked by a fellow skeptic many years ago, on a site called Affilorama.

Heading to the Affilorama landing page (I’m starting to pick up the language of internet marketing), I see that the site is alive and kicking, and it tempts me with the offer to Join now – It’s free. Furthermore there’s a wee pop up in the corner with a Message from Cecille:

and I get back to you asap 🙂

And there’s a picture of Cecille smiling out at me.

Time to do some research

Cruising the internet waves looking for affiliate marketing clues I encounter many nets, lines and hooks hoping to catch me and drag me flapping and splashing onto the deck of their money trawler. Mark Ling is one of the big fishermen of the affiliate world. Affilorama is his company, and it claims to be the largest affiliate marketing community and training website on the internet. It’s based in New Zealand and has been around since 2006, so no fly-by-night operation.

Is his company named in honor of the ‘eighties girl group Bananarama? I ask myself.

The page has lots of quotes from happy customers, delighted with the   training they have received. Sounds like lots of great free stuff, so I fill in my name and email, and off we go.

The email with the quick start guide link arrives. It’s pretty good. Clear, straightforward and only a bit over-hyped. It starts with very basic infographics such as a child might make: 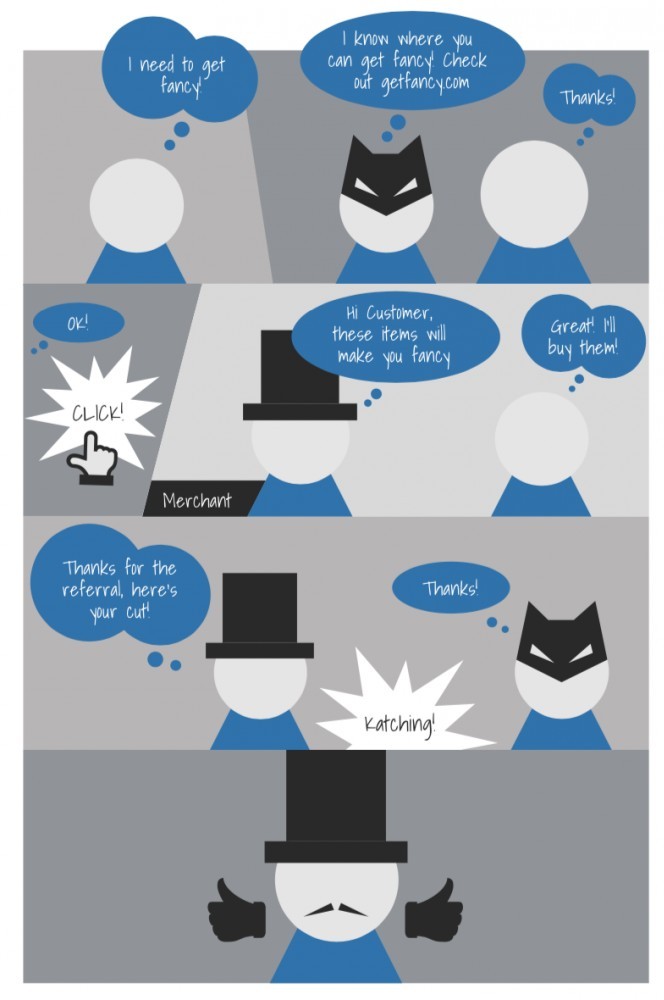 From this starting point it goes on through the fundamentals of Affiliate Marketing. The most pertinent advice for me is to chose a route and follow it. Don’t fill your computer, or head, with courses you’ve never completed. Don’t get into a state of Analysis Paralysis.

We were promised Jetpacks

The Quick Start Guide points me to the AffiloJetpack, the first of several upsells I will encounter at Affilorama. It will cost me $997, and is, apparently, all I need to quickly set up my Affiliate Marketing success story. I am very much enjoying the terminology around Affilorama. Is Mark Ling a fan of turn-of-the-millennium cartoon Futurama? I ask myself.

The AffiloJetpack, I’m told, is

system for building “money-making machines” that earn you an income on autopilot.

They want it to look like they added the ‘hugely powerful’ as an afterthought. In case I was thinking it was only powerful in a small way, or not at all.

Afterwards in parenthesis is another seeming afterthought: (And the best thing is – its done for you!)

This all sounds a bit too good to be true. I’m not an idiot.

Reading on, I find the Jetpack method is all about setting up a simple website to get people to give you their email address, and from then on you send them a series of emails that create a great relationship/soften them up for the sell.

AffiloJetpack offers many enticing things which it sounds like could make things easy for me. Easy-to-build hosted website, a selection of pre-selected lucrative niches to chose from, easy to follow website content templates. Most impressively there is a whole ready-to-go email marketing campaign, such as the ones I have had inflicted on me by anyone I have given my email to. I certainly would find it daunting to come up with such an email campaign myself, so I can see the attraction of the readymade

Is it worth it?

Well apparently if I did it all myself it would cost more than three times as much. And I wouldn’t get all the support and advice. And I get up to five websites, which means if I count each one as costing over $3K then I’m saving many thousands (not sure about the mathematics there).

There’s a generous money back guarantee. If I follow the program and I’m not making money after 60 days, I get my money back plus $100. Can’t say fairer than that.

I can’t afford to try this right now for two reasons. I have not got the upfront cash, and I have not got the time to give it my full attention for 60 days.  If I had 5 or 6 hours a day free I might try this system, because I reckon if you put the work it could be the business. Hard to be sure though.

What do the reviews say?

I go looking for independent reviews of Affilorama, and oddly, most of them seem to end up recommending Wealthy Affiliate.

Could it possibly be that these reviews are being written by members of the rival affiliate training program? Well yes. In fact to find a review of an affiliate program that does not include an affiliate link to that or another program is impossible.

But still, there is frequently good information to be found. internetaffiliatemarketingnetwork.com offers this synoposis:

If you’re just getting started and the cost is one of your factors to consider, then I’ll suggest you go with Wealthy Affiliate. But if cost is not an issue with you, then you might want to consider using Affilorama.

What about Premium Membership?

Well this is a strange thing. Affilorama has yet to offer me Premium Membership. I only know about Premium membership from seeing it mentioned on Affilorama reviews. None of the emails I have been sent mention it. It isn’t featured on my home page at Affilorama. Sources tell me it costs $69 a month and includes site hosting and easy site building similar to what can be found at rivals Wealthy Affiliate (told you so).

The other upsells I’m offered are the Pathway to Passive (or maybe Path2Passive), which is an ebook that costs $37, and the Affilotools. Affilotools is free to try out, but is only useful once you have your website up and running.

Lots of successful Affilorama members say they used the AffiloramaBlueprint. This seems to be what we might term a legacy product. It isn’t promoted on the main page, yet occassionally I get an email offering it to me. It will cost me only $1 for a 14 day trail, and then if I like it, I can pay the rest of the full price, which is $197.

AffiloBlueprint describes itself as the ULTIMATE step-by-step affiliate training for newbies!  This sounds like it could be just what I need, and is not too pricey (you can pay in 3 installments of $66). My concern is that its been around a long time and Affilorama seem equivocal about promoting it (as they are with the Premium membership). It has ‘obsolete’ written all over it.

Affilorama seems totally legit. For an absolute nov like me, the free experience lacks a bit of guidance, and the various things offered (and not offered) are somewhat bewildering. I could do with someone making the steps easier for me. Maybe that happens in the premium version, but I’d have to find out how to sign up to it and pay the money first. I decide that while I may well use some of these fine resources, I need something else to get me started properly. Is it time to look again at Wealthy Affiliate (see what I mean?)

Hi, I love your post. Its entertaining and educational in a fun way. Thanks

Thanks Marisa, I am glad you appreciated it!
Victor

Wahooo!!! What a great post about Affilorama.
I like the way you explain things. A well being style that describes things as they are.
For me, Wealthy Affiliate is the way to go for anyone who wants to build a successful business online.
I tried Afilorama’s free membership but I don’t find that this platform is to be compared to WA.
Thank you for sharing!
All the best!

Hi Sebastian, I’m glad you enjoyed the post. I’m trying to describe my experiences as directly and honestly as I can while also hoping to be somewhat entertaining. Thanks for you kind comment!
Victor